Figuring out the best dirt bike size can be challenging, especially for someone who never owned one before. In this post, you’ll learn various factors that you need to consider when choosing a dirt bike that’s right for your body and skills.

Of course, there’s more to dirt bike sizing than knowing a rider’s age. Learn more about it in the sections below. 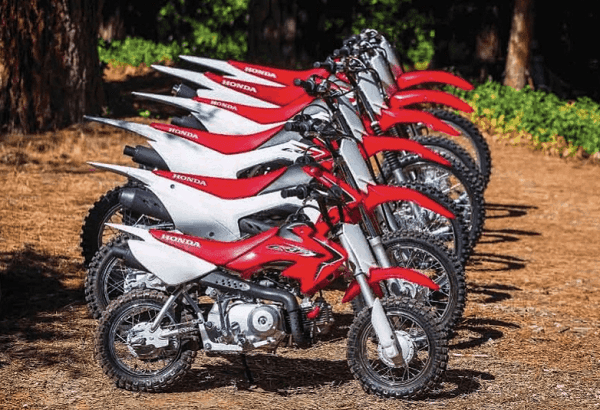 A dirt bike that perfectly suits your height and stature will help you feel comfortable, confident, and safe at all times while riding it. When buying a dirt bike for yourself or your child, it’s prudent to seriously consider these key factors:

So, are you going to buy a dirt bike for yourself or your young one?

Children as young as three years old can start on an electric dirt bike before transitioning to a 50cc dirt bike with training wheels (gas-powered). Dirt bikes for children usually have a seat height of 18 to 34 inches, with an engine displacement ranging from 50cc (cubic centimeters) to 150cc.

Note: Engine displacement refers to the total volume air/fuel mixture an engine is capable of drawing in per revolution.

Choosing a dirt bike that fits your or your child’s height is one of the most important factors you should carefully take into account. A dirt bike that’s too high or too low can be dangerous for different reasons:

Here’s the rule of thumb: Your feet should should be in a tiptoe position. Meaning, they should touch the ground. However, they shouldn’t be completely flat while on the ground.

Weight (yours and the dirt bike’s) has a significant impact on the performance of dirt bikes. To be more specific, it affects their acceleration and maximum speed.

The golden rule is the heavier the load on a dirt bike, the slower it accelerates. This is exactly why dirt bikes with the same engine power, but with different weights will accelerate and reach maximum speed differently.

For instance, there are two dirt bikes with a 300cc engine. One weighs 256 pounds, while the other weighs 248 pounds. Expect the 248-pound dirt bike to reach maximum speed and accelerate slightly faster because of its weight.

Aside from your weight, other major factors that determine how much a dirt bike can handle include:

Most dirt bikes are able to handle riders who weigh less than 320 pounds. However, if a rider exceeds this weight limit, tweaking a dirt bike’s suspension might be necessary.

What if you get a dirt bike that has a more powerful engine? You can do that, but make sure your weight can safely handle it.

For instance, you weigh 150 pounds then you bought a 250cc dirt bike. Chances are you won’t be able to control it. Plus, you’ll put yourself at risk for injury

Whatever your height, weight, or body frame may be, you need to pay close attention to a dirt bike’s engine displacement. The bigger the displacement (or capacity), the more powerful an engine can be.

The first thing you need to do is to determine what internal combustion engine (two-stroke or four-stroke) and engine size you need. The correct choice will depend on your age, skill level, and weight.

Between age and experience, the latter is a more important consideration. Let’s say you’re 25 years old and new to dirt biking. You’ll definitely struggle to ride a 450cc dirt bike. Meanwhile, a 14-year-old with more experience than you won’t have problems handling a dirt bike with the same engine capacity.

The table below will give you a good idea of the engine capacity that fits your or your child’s age or height.

You should always take your skills and experience into account since they’ll ultimately determine what dirt bike size is best for you. If a dirt bike’s too powerful, you can end up hurting yourself. If it’s underpowered, going up a hill at a slow speed is going to be difficult.

If you’re a beginner, choose a dirt bike that’s light and has an engine that fits your weight and experience. You have plenty of options:

Note: Don’t overestimate your capabilities. While your level of experience is important, make sure you don’t pick a dirt bike that’s too big or too small, too light or too heavy for your height and weight.

Can You Adjust the Height of a Dirt Bike? 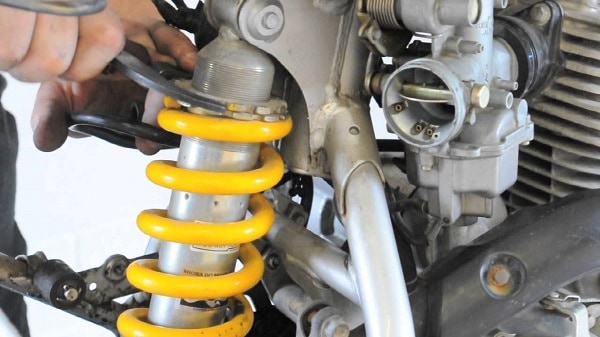 Ideally, you should go to a physical store to personally examine and test the dirt bike you’re planning to buy. This is the most reliable way to find a properly sized dirt bike.

Remember: The right dirt bike for your size should allow you to raise the heel of your foot until only the ball of your foot is touching the ground.

If it’s not possible for you to do that, your next best alternative is to refer to the seat height. This is the measurement of the lowest point of a dirt bike’s saddle to the ground, while it’s in an upright position.

You need to know your correct seat height to make sure you sit comfortably on the dirt bike, get a good ground clearance, and make more room for the movement of the suspension. You can refer to the sizing chart below for the exact requirements by age and height.

But what if your dirt bike is too high or too low for your height? What can you do?

Fortunately, most manufacturers offer a low-profile seat. This accessory is usually lower and more tapered than the original seat.

However, aftermarket dirt bike seats can be expensive. If you want to modify your bike’s current seat to save money, you can. Below are two of the most common methods for customizing your existing seat yourself.

There are bad and good effects of lowering the seat height. If you do it right, you can have a dirt bike that suits your short height and handles a bit better in certain situations because of its lower center of gravity.

The downside of a seat height that’s too low is it can make you feel uncomfortable and prone to crashing later. You’ll also have less ground clearance for leaning over in order to turn.

If you don’t want to spend money on expensive suspension options (e.g., longer lowering links), trimming the seat foam is a cheaper option. It’s actually the most popular method of lowering the seat height.

The advantages of using this method instead of using a lowering link or an internal suspension work include:

People have different ways and tools they use to cut seat foam. The steps and tips below only serve as a general guideline. Feel free to tweak some of them to fit your specific needs.

You can use a hacksaw blade, electric knife, or large serrated bread knife. Between the three, the electric knife works great, especially if you need to remove plenty of depth.

For this part of the process, you’ll need a lot of patience. Take your time in cutting small amounts of foam at a time, so it’s easier to correct mistakes. You can typically shave off around 1 to 1.5 inches from the center of the seat foam and still have enough left.

A hand-held electric belt sander or sanding disc works great for shaping the edges of the foam. You could probably rent one of these from a local home improvement store, like Lowe’s, or a local rental store.

Between the two, a pneumatic staple gun is usually more powerful. The downside is you’ll need an air compressor to run it. A commercial-grade electric staple gun doesn’t have the same issue. You only need to plug it into an electric outlet and start sinking staples into tough materials.

Note: If the seat cover is already worn out, you might want to purchase a new one.

Another way of reducing seat height is drilling small holes in the bottom of a dirt bike’s seat foam to remove the core. This method isn’t only easy, but it also gives you instant positive results. In fact, some people think it reduces seat height much better than shaving off the seat foam.

So, why does it work?

Because of the small holes you’ve created, the foam becomes softer and sinks further. This gives a significant difference in the seat height while riding.

Aside from patience, accurate measurement is a must for this method. Even if you drill only an inch lower, it’s already going to cause a significant impact.

After replacing the old seat with a high seat, you could also use taller handlebar mounts or bar mount riser clamps. When we say “taller,” we’re referring to the height and rise of a handlebar.

You measure a handlebar’s height from the end part of the bar (or control length) to the clamp area. Meanwhile, the measurement of the rise of a handlebar starts from the clamp area to the bar end (or the first steep bend).

Sag may refer to free sag or race sag. The former measures the sagging of a dirt bike when it’s stationary on the ground, without you on it. The latter measures the same thing, but with you sitting on it.

Here’s how to measure and adjust the sag of your dirt bike:

In general, shopping in person is the best way to pick and buy a dirt bike. It allows you to sit on the dirt bike you want to buy, with the ball of your foot and toes touching the ground. That’s the dirt bike that’s perfect for you.

Buying a dirt bike doesn’t need to be an expensive mistake. Before committing to the purchase, and if you can’t go to your local dirt bike shop, we hope you think about our tips and information to help you find the dirt bike size for your height, weight, and experience.