What is a pit bike? If you’re asking this right now, we’re here to answer that question and more. Hopefully, this article will help point you in the right direction.

Simply put, a pit bike is the kid-sized version of a dirt bike, but only slower and less powerful. Because of that, it’s great for older children and teenagers. Although adults can have fun with it, too.

Whether you plan to buy a pit bike or not, it’s good to know more about this “training wheels” of the dirt biking world. In the next sections of this article, we’ll try to answer the following questions:

What is a Pit Bike? 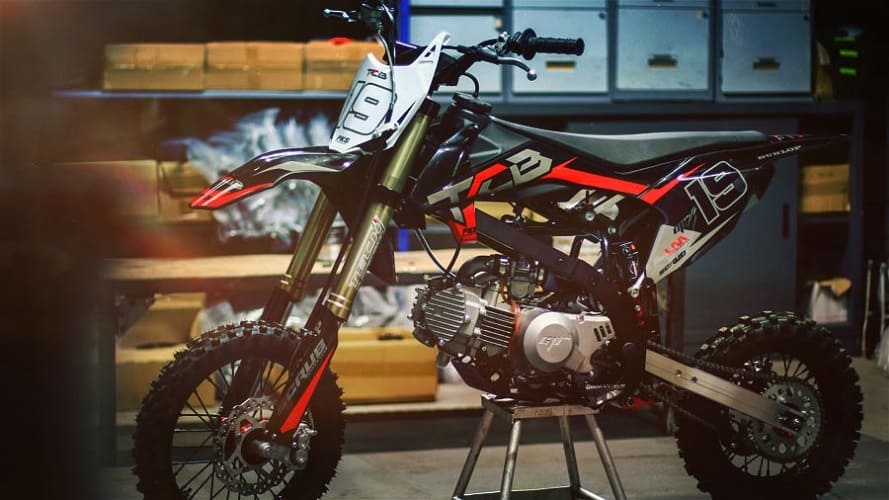 Pit bike isn’t a strictly defined category of motorcycles. The term usually refers to a category of small and lightweight motorcycles that people use for maneuvering through narrow pit courses. Aside from having a smaller frame and tires, it’s also equipped with a four-stroke, horizontal engine with lesser power (around 50cc to 110cc), if compared to dirt bike engines.

The origin of pit bikes goes all the way to the 1940s. The first pit bike was just a simple bicycle, like the Schwinn StingRays (1963). The pit bike of the 1950s and 1960s was equipped with a pull starter, rear tire brake, and 3HP Briggs & Stratton engine. There’s no suspension system.

The iconic Honda Z50 Mini Trail, a.k.a. the “Monkey Bike,” was a street-legal mini bike. It’s still widely available today. The newer version of the classic Honda Z50 still has the retro design that people love, but with a slightly larger construction to fit larger riders and modern roads.

The Honda XR-50F/CRF-50F mini-moto is one of the most popular dirt bikes worldwide. Along with other dirt bikes made by other brands (Kawasaki, Suzuki, Yamaha, etc.), it was considered the inspiration that started the pit bike craze.

Are pit bikes road-legal? The short answer is no—at least pit bikes straight from the factory are not road legal.

Can you make them legal to use on the road? Yes, but it’s not going to be easy.

For starters, you need to make sure the parts of your pit bike (engine, fuel delivery system, brake light, rear view mirrors, etc.) are street legal and could pass most state inspections. You also need to register it and get a license plate, which might take all day.

Are you up for that? If not, you might want to consider getting the road-legal Honda Z50 mini bike instead.

We can classify pit bikes based on their purpose and the power output of their engine.  Let’s go over three of them.

If you plan to get on the track and participate in races, get a racing pit bike. This type of pit bike generally comes with components that are fast and powerful. It’s somewhat similar to a motocross bike, but only smaller and lighter.

Factors that determine the speed of a pit bike:

The definition of a production pit bike could be different for others. But, in general, it refers to motorcycles that are designed for light off-roading. It has a larger displacement engine and components, as well as more enhanced features (e.g. suspensions).

One of the downsides of a production pit bike is it tends to be expensive. But if you’re looking for an off-road pit bike, it’s worth the consideration.

Equipped with a fuel-efficient, four-stroke engine, the Apollo DB-X18 125cc is perfect for both beginner and experienced riders. It’s capable of tackling almost all kinds of terrains, including a muddy trail course.

Pit Bikes for Kids and Teenagers

Pit bikes for kids and teenagers are generally smaller than production and racing pit bikes. Because they’re smaller, lighter, and less powerful, they’re ideal for these age groups, who might just want to ride them around the yard or concrete surfaces.

When buying a pit bike for your young or teenage children, there are a few things you need to consider:

For kids, it might be better to get them a starter pit bike with a four-stroke 50cc engine. It usually has a button to start the electric engine and a linear power delivery. These components make it easy for young children to start and control the bike.

Note: The capacity of an engine is measured in “cc” or cubic capacity. Most of the pit bike engines on the market have a capacity ranging between 50cc and 110cc, or even up to 150cc.

How is a Pit Bike Different from a Dirt Bike? 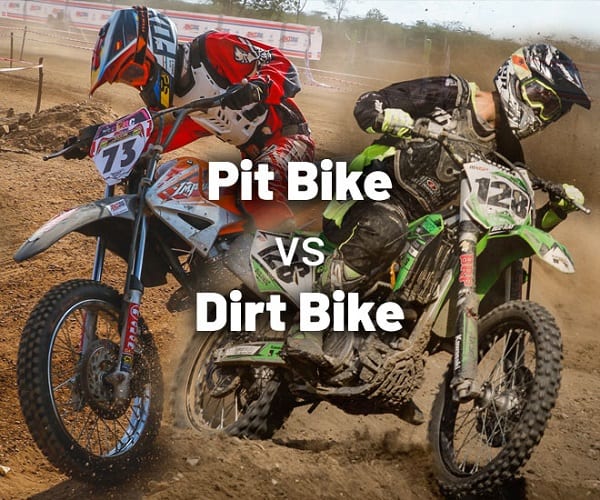 Which is right for you: a pit bike or a dirt bike? It’s a tough question to answer, especially if you’ve never tried any of them before. To give you a good idea, we’ll highlight some of the key differences between the two.

One of the main advantages of pit bikes over dirt bikes is their relatively lower price. Dirt bikes typically cost more (around $2,000 to $10,000); but the price really depends on different factors, such as brand and quality.

When it comes to power and speed, pit bikes can’t compete with most dirt bikes because of their smaller engine, frame, and other parts. The good news is pit bikes are still a lot of fun and can reach speeds between 60 mph and 75 mph, which are more than enough for the average rider.

Without a good suspension system, pit bikes and dirt bikes won’t give you a great performance. But between the two, dirt bikes have a more superior suspension because of the type of bumps found in off-road courses.

If you want an all-terrain bike, get a dirt bike. They’re designed to handle anything, from competition tracks to rocky mountains.

As mentioned earlier, pit bikes are built for getting around the pit area fast. You could also use them for riding in relatively smooth dirt roads and concrete floors.

Pit Bikes: The Good and The Bad 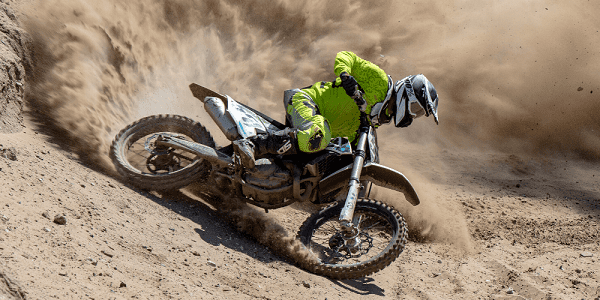 The more you know about the benefits and drawbacks of a pit bike, the easier it is for you to make the right buying decision. Here are just a few advantages and disadvantages of this bike.

Depending where you live, a pit bike is generally considered not street-legal. Thus, it doesn’t require a license.

As what we’ve mentioned earlier, you can get it licensed, but that requires money and completion of certain requirements. Plus, if it’s a newer model that has a Restricted Use Motorcycle (RUM) sticker on it, it’s a no go. A RUM bike is strictly for recreational and competitive use only.

Since it’s small and light, a pit bike is usually easy to store and transport. You can put it in the back of your truck bed or put it on a tow hitch cargo carrier, without problems.

Depending on the type, a pitch bike could weigh anywhere between 114 and 180 pounds. Some models would even weigh less than a hundred pounds. For example, the YCF – 50E has a curb weight (weight without the rider or baggage) of only 79 pounds.

We’re not saying it doesn’t need maintenance ever. But compared to its full-sized relative, the dirt bike, it’s easier to maintain.

Probably one of the best things you could do to extend the life of your pit bike’s engine is changing the oil. Do it at least every 20 hours. Or, if you can, try changing the engine oil every 10 hours.

As to whether you should use synthetic oil or mineral oil, that’s still up for debate. In terms of price, mineral oil is relatively cheaper than its synthetic counterpart. Some people prefer synthetic oils because they’re consistent and free from contaminants.

Pit bikes are super fun for older children, teens, and adults. They’re great training bikes for those who haven’t tried or are planning to transition to dirt bikes or motorcycles, without ever requiring training wheels.

The average price of the best dirt bikes would cost anywhere between $8,000 and $9,000. Pit bikes cost considerably lower than dirt bikes. The starting price of new ones would seldom exceed $1,200.

If you’re really on a tight budget, you can get a secondhand pit bike for as low as $200. Of course, if you want the best models, be prepared to shell out $4,000 or more.

There are several possible reasons for the low price, such as:

Safe and Easy to Use

Given their lower prices, pit bikes are just not built for extreme racing and stunts or climbing and descending steep, rocky hills. Their engine is not as powerful as the engine of dirt bikes, so they’re a lot slower. That’s why they make great beginner bikes for kids.

Of course, this doesn’t mean they’re completely safe. Injuries will always happen in any sport. But in the case of pit bikes, the resulting injuries are more likely not life-threatening—that is, if you’re wearing the proper protective gear (helmet, goggles, elbow and knee pads, body armor, etc.).

Pit bikes are fun and functional, but they’re more like a toy than a serious off-road vehicle. Companies generally manufacture them cheaply, which could cause them to break quickly.

This isn’t entirely a major issue for some people since kids and teenagers are more likely to outgrow them within a few years. So, while saving up for your dream dirt bike, one of the best things you could do to extend the life of your pit bike is to perform regular maintenance.

Being as small as they are, pit bikes have engines that have less torque than that of dirt bike engines. This means that, even if both of these bikes have same-sized engines, the dirt bike would still be more powerful than the pit bike.

So, what does torque mean?

Torque is what makes a pit bike or a dirt bike moving. The more torque there is, the more a bike is capable of riding through muddy and slippery terrain and getting out of a ditch.

Pit bikes have its upsides and downsides. But overall, they’re affordable, easy to maintain, fun, and safe. They’re a great investment, especially if you’re not yet ready to spend bucks on a full-sized dirt bike, you’re planning to learn to ride a dirt bike later on, or you don’t want to spend most of your time on maintenance.