Winner of the national road and time trial for four times, Jelena Eric is one of the most popular cyclists in the world. At a young age, she has already proven herself and continuously surprises many people with what she can do in every race. She was once a member of the Cylance Pro Cycling and has also been a part of other high-performing teams. Keep on reading to know more about the life of Eric on and off the cycling track.

Born on January 15, 1996, Eric is a Serbian cyclist. She has been representing her country in many international tournaments. Before she became a professional cyclist and prior to conquering the global stage, she was already riding a bike but casually and not as an athlete.

In Serbia, handball, tennis, and football are the most popular sports. It is seldom that people choose to pursue cycling, but such is the path that Eric pursued. It was her brother who inspired her to try biking. At that time, her brother was riding at their uncle’s cycling club. His uncle was a professional racer for over a decade, and such has also inspired her to race on two wheels. She was 12 years old when she first fell in love with cycling.

Eric has been a part of several teams during her professional career. She started with BTC City Ljubljana in 2016 and 2017. In 2018, she joined the Cylance Pro Cycling Team for a year. Unfortunately, the team had to stop in the same year, which prompted her to explore other available opportunities that would help her unleash her full potential in the sport. She moved to Ale Cipollini in 2019 and became a part of Movistar Team in 2020 and 2021.

At Movistar, she is considered one of the most versatile riders and a big asset to the team. Even as a support rider, she can conquer almost all kinds of terrains. Not to mention, she is the only Serbian rider in the highest level of cycling races.

Other Things About Jelena Eric

Here are some more interesting things about Eric. 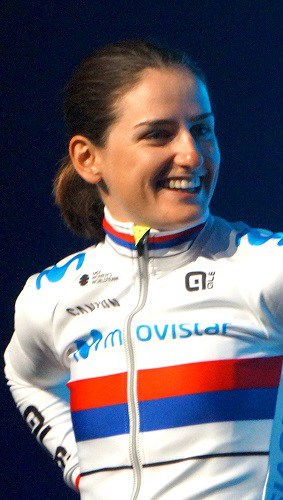 When asked about who she looks up to, Eric notes that Phillipe Gilbert was one of her inspirations. When she started cycling professionally, she looked up to Giorgia Bronzini, especially when the two got to work together in Cylance.

Eric also shares that her favorite race is Flanders. The race was held in Belgium and one of the most challenging that she experienced. She loved to stretch herself and see what else she can do, so she is motivated by difficult races.

When the rest of the world was in lockdown, Eric was not spared. She spent most of that time in Spain. With no competitions and limited movements, she was training and getting better at home. she was doing cardio and rollers, among other exercises.

With the opportunity to now go and train outdoors, Eric has been doing a lot of hiking. More than enjoying the outdoors, it also helps in giving her stronger legs to cycle faster.

Serbians are not popular for cycling. In the country itself, it is not a well-known sport. However, Jelena Eric proves that she has what it takes to wave their flag in the global cycling scene. Once a part of Cylance Pro, Eric is a notable cyclist with a bright future ahead.