Your once new or fresh bike will gradually show wear and tear or degradation as time passes. Bike owners are normally concerned when they see rust forming on various parts of their bikes. The problem is understandable if the bicycle is constantly utilized outside, and it is always exposed to sunlight, water, or air.

What should a rider do to eliminate and prevent further rust from forming on the bicycle? To stop the rust from building up on your bike, familiarize yourself with how it is cleaned. It is a skill that should be developed in conjunction with the upkeep of a bike. It is important to remove any rust from the main body, chain, or another part of your bike to prolong its lifespan.

This article delves into removing rust from different parts of a bike, methods of removing rust, and tips for preventing rust on bikes. Continue reading to learn more!

How to Remove Rust from Different Parts of a Bike 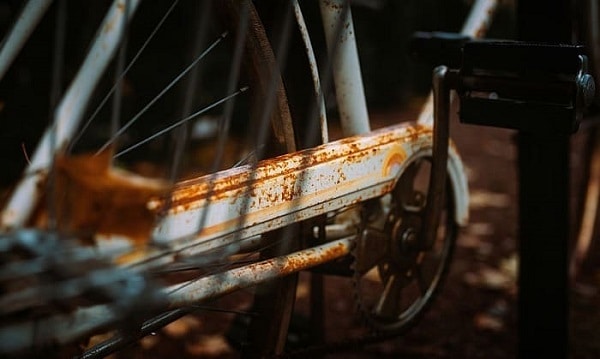 Here is how to remove rust from different parts of a bike.

A bicycle’s chain is the first component visible when rusty, but removing rust from a bicycle chain is very simple. The requirements are a rag, lubricant, a scouring pad, lime juice, and some outdoor riding to get rid of rust from the bike.

Here are the steps for removing rust from the bike chain.

Look for dirt and debris on the bicycle chain’s entire length. Keeping the bike next to you, raise the back part and pedal several times backwards, looking for signs of dirt, grime, or chain corrosion.

With a dry rag, wipe out any dust before a bristle brush to clean off the dirt. If you want to reach between the chain’s side plates and the center roller, you may need to use brushes of different sizes. Having removed the dirt, it’ll be possible to see the corrosion well.

Soak a steel scouring pad in lime juice and utilize it to clean the chain’s surface rust. To remove difficult rust stains from bikes, flip around the bike and get the chain off with the link removal tool. After soaking the chain for about an hour or two in lime juice, remove the chain from the bowl and rinse it off.

Put off the chain from the lime’s bowl and dry it with a rag. Before reattaching it to the bike, make sure it is completely dry.

Pour 1-2 drops of high-quality lube onto each pedal and spin the pedal slowly until evenly distributed. Lubricate the side plates and the center rollers along the chain and let it soak in and then wipe off any excess. A lubricant prevents rust on the bicycle chain by forming a seal between it and the different elements.

Here is how to do it.

Pour water and baking soda into a container in a 1:1 ratio and stir until a thick paste is formed. To boost the effectiveness of your mixture, add a drop of lemon juice.

Put a small amount of paste on a brush and ensure that it is evenly applied along with the bicycle frame. After the paste has been sat on the frame for around 15 minutes, remove it from the frame. Desist from removing the paste covering before it has dried; the rust will take some time to come off.

To remove baking soda paste from the bike frame, use steel scrub pad. You’ll identify the corrosion is coming away, as well as the metal frame flaking off. While you increase scrubbing, keep adding the paste to until the rust is completely removed.

It is recommended to start wiping off the baking powder after around 10 minutes. You may want to repeat the process until you are sure the frame is completely dry and any remaining rust stains have been removed. Keep your bike in a dry and cool place to prevent rust-related issues from reoccurring.

If you wish to get rid of the rust on your bike’s handlebars, you’ll need the following items: a cup, table salt, dry rag, lime juice, a toothbrush, and a tablespoon.

You can remove rust from the handlebars by following these steps.

Clear the rust between the handlebars using various scrubbing movements while using your toothbrush. It would be best if you kept scrubbing until you see the corrosion disappearing. If the toothbrush isn’t working for you, you can use a rag instead.

When you are done removing rust, use clean water to rinse the bike and then dry it with a dry rag. If you want to prevent your bicycle handlebars from rusting, you should wax them more than two times a week. As an alternative, spray the metallic handlebars with clear varnish.

Follow the below steps to remove rust from the bike spokes.

Take a fine steel wool pad with some elbow grease and scrub each spoke of your bike wheel with it. Using the steel wool’s pinch, continue rubbing it upwards and downwards each spoke. Focus the steel wool on the spoke’s difficult spots.

Once the rust begins to disappear, continue to rub the spokes. If you are dealing with persistent rust stains, you might have to intensify your effort. As soon as you discover the steel wool has fallen off the pad, use fresher pad areas.

After cleaning the bike spokes, use a piece of cloth to remove the rust stains and any metal shavings stuck. Remove excess wax by rubbing it all over your bike spokes.

Ensure you have dry rags, degreaser, and aluminum foil on hand.

Here is the procedure for removing rust from the rims.

Ensure the spokes, inner tubing, and tire are parted from the bicycle wheels to only the rims are left.

Put the aluminum foil in a degreaser and leave it there for about a minute to soak. Rub the bicycle rims with the aluminum foil after being wet, and focus on areas with rust spots. This process should be repeated until you eliminate all the rust from the rims.

To prevent rust from forming again, get a dry rag and wipe the bike’s rims clean prior to any application of wax.

Top Rust-Moval Agents for Use on Your Bike 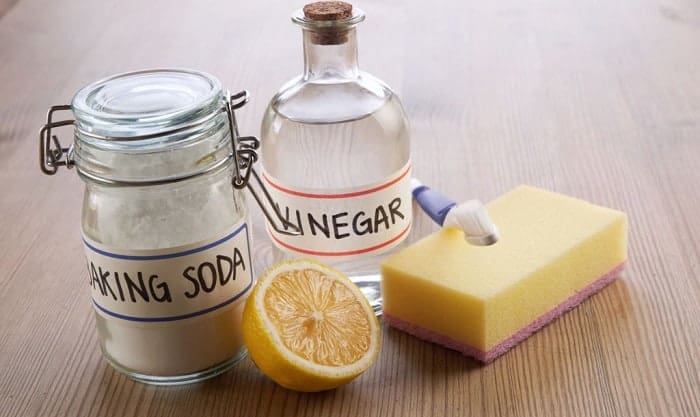 To remove rust from your bike, you can use a multitude of cleaning agents. Here is a list of some of the rust-removal agents you can use.

To enjoy a rust-free bicycle, use baking soda. This critical ingredient can be found in every household. The baking soda and water mixture must be 50/50 for a paste to be made. This paste should be applied over the rusted area and the corrosion fully covered. After the solution has been applied, leave it on the area for 15 minutes.

Utilize a toothbrush or a scrubbing pad to brush off the solution of the baking soda after a quarter an hour. During this process, you will see the rust coming out. Continue applying the solution until it completely dissolves the rust.

If the vinegar has been on the surface for 15 minutes, then it can be rinsed off, but you will begin to see results after that. Vinegar can cause corrosion when it comes in contact with surfaces, so washing it with water will prevent this. Vinegar can be used to soak all the small portions of the bicycle to be cleaned from all the rust.

It’s possible you won’t be able to get the rust off with any of the items listed above. In this case, you can utilize rust-removing products specifically manufactured for the job. If the rust is difficult to remove, chemical rust removers are an option.

Before you apply the remover, you should dress in protective goggles and gloves, so your skin, hands, and eyes are not damaged. When applying chemicals of this nature, it is important to peruse the instructions and follow the application procedures exactly. If you follow this technique, you’ll be able to achieve an excellent result in the removal of rust from your bike.

It is possible to remove rust from chrome components of a bike and its chrome surfaces using steel wool. One of the best things about steel wool is that it’s well-accessible and easy to find. Moreover, the fact that it is cheap makes it an excellent tool for removing rust.

You only need to scrub gently on the rusted surface to discover how effective the cleaner is. Besides removing rust, it can also remove any oxidation that is forming on the surface. Using steel wool on your bike’s chrome will even make it shine. Using extra-fine steel wool to remove rust will be sufficient for small components.

You can also remove rustiness from your bike with aluminum foil, which is an easy-to-get material. With its abrasiveness, the foil can remove rust from a bike’s surface. In addition, the foil is softer than steel, meaning it will not damage the surface when used.

When using foil, please remember to wear gloves since the foil can stain your fingers if you do not wear any protection.

Tips on How to Prevent Rust on Bikes 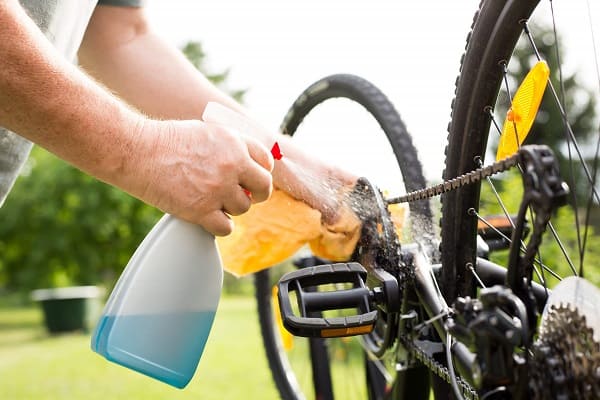 Preventative measures are worth more than cures.  It is best to prevent rust when it develops on your bike whenever possible.  There are usually a few usual suspects when it comes to surface rust developing on bikes. Keeping your bike rust-free can be achieved by combating each of them.

Here are the tips on how to prevent rust on bikes.

If possible, you should store your bicycle in a climate-controlled area, such as the entryway to your home or an air-conditioning-enabled garage.  Ensure it is stored in a shed or an enclosed area where the elements won’t invade it.  A mere bit of precipitation will result in rust appearing on worn areas of the bike surprisingly fast.

After The Rain, Always Wipe Your Bike Down

You must wipe down your bike thoroughly after riding in the rain or after riding in the morning after a rainstorm where the roads are still slick.  Be sure the surface is generally dry.  You should pay attention to any shining parts, such as the chain, braking components, and other moving parts.

Make Sure Your Bike Is Oiled

It is important for every bike owner always to keep bike oil on hand, and it is also important to lubricate their bikes regularly.  It is a good idea to oil your chain and any other components exposed to the elements.  Also, make sure to oil that part of the pedal where it meets the crank. The component should be oiled and wiped with a rag after it has been oiled.

Watch Out For Your Sweat

There are times when the water dripping from your body can cause your bike to rust, especially if sweat from your face drips around the handlebars, stem, and head of the bike.  This can be a particular issue if you use an indoor bike trainer since you aren’t actually moving.  A towel laid over the bike’s stem area will do wonders to keep your sweat from ruining the bike.

Obtaining the skills needed to clean rust from a bike is an important part of biker training. This is a vital element in ensuring that your bike is clean and maintained. Additionally, this skill will help you to maintain your bike and prolong its life.