Are you thinking of getting into biking? Here are 10 great reasons you should start now.

Riding a bike offers a wealth of benefits. You can go biking for exercise, competition, fun, or as an inexpensive and safe mode of transportation. If you’re seriously considering it, or if you doubt it’s better than other physical activities, we’re here to tell you why it’s a great option.

Continue reading to find out some of the main advantages of biking—whether for exercise, leisure, or travel.

Biking is an ideal choice because bikes are readily available and inexpensive (compared to cars). And there’s a growing number of scientific studies pointing toward its ability to effectively manage stress and improve mental health.

Imagine this: Commuters are more stressed than fighter pilots or riot policemen, according to a study by Dr. David Lewis, a Fellow of the International Stress Management Association.

In the said study, he compared the blood pressure and heart rate of 125 commuters with those of police officers and fighter pilots. He found out that commuting (by car or train) sends people’s blood pressure through the roof.

So, how can biking help? Biking helps in several ways:

Our body usually uses carbs as fuel during exercise. But if you regularly ride a bike, especially at a higher intensity, you can burn a lot of body fat.

It usually depends on the duration and intensity. Overall, biking can help you tone your muscles and burn fat in certain areas of your body, specifically your glutes, quads, and even your core.

According to the American Council on Exercise (ACE), you need to cycle for at least 30 minutes at a moderate intensity. If you cycle for an hour at the same intensity, you’ll burn around 300 calories.

Prof. Janet Lord, the Director of the Institute for Inflammation and Ageing at the University of Birmingham, suggested that our immune system starts to weaken by around 2 to 3 percent every year starting in our 20s. This is why we’re more susceptible to infections and other health problems, such as rheumatoid arthritis, as we get older.

The reason for this is a shrinking thymus, a pair of similarly sized lobes that are found behind the breastbone but in front of the heart. It produces the progenitors (cells that are similar to stem cells), which eventually mature into T-cells.

Researchers at the King’s College London and the University of Birmingham conducted a study to examine the health of older individuals, who spent most of their lives exercising. They wanted to find out if staying active slows down aging.

For the study, they compared two groups of adults:

The researchers found out that staying active for a long time didn’t just benefited the muscles. It also has an anti-aging effect on the immune system.

Biking strengthens the muscles of the lower part of the body, specifically:

A question you might be asking, “Will biking make your legs and thighs massive?” The short answer to that is no, unless that’s what you’re after.

There are different factors that determine how much muscles you’ll gain through biking, such as: 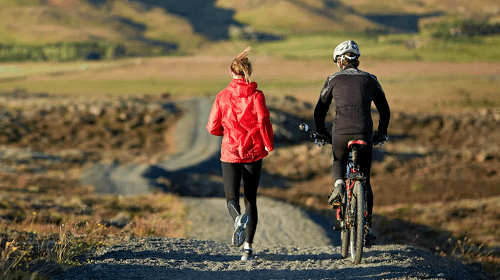 Your lung function will typically start to decline after the age of 35. And by the time you’re 65 years old, you already lost up to a liter (33.8 ounces or 0.26 gallon) of your lung capacity.

Unless you have an existing medical condition, a decrease in lung function or capacity is a normal part of the aging process. However, there are many things you can do to help keep your lungs as healthy as possible, such as exercising. In fact, if you stick to biking, it can help you improve your maximum lung capacity by 5 to 15 percent.

Here’s how it works:

The number of Americans who use a bike for commuting has continually increased through the years. In 2017, there were around 47.5 million bike riders in the United States.

Based on several scientific studies, biking has the potential to reduce risk of heart disease and cancer among cyclists. One of these studies was a conclusive, peer-reviewed study that was published in The Lancet Planetary Health journal.

Researchers of the said study tracked over 300,000 commuters. Their data have shown that 66 percent of people drove to work, 19 percent rode public transportation, 12 percent walked, and 3 percent rode a bike.

Based on the study, biking has the following benefits:

People who commute by walking also experienced a reduction of cancer diagnosis by 7 percent. However, it was less significant than those who chose to commute by bike.

Low-intensity workouts are as effective as high-intensity workouts. Because it’s gentler on the joints, they’re a great option for almost everyone. What’s more, they can help you improve your strength, manage your stress, and lower your blood pressure.

Low-impact workouts are an ideal option for you if:

According to a study led by Dr. Darryl D’Lima, the Director of the Orthopaedic Research Laboratory at Scripps Clinic, walking (on a treadmill) and biking are two of the best workouts for those who have a knee with an artificial joint. But between the two, bike riding generated the least stress on the knees than walking.

Note: There’s still a possibility that you’ll hurt yourself while biking, especially if your bike is the wrong size, or if the height of the handlebars and/or seat are incorrect.

Biking is a great way for healthy older adults to reduce risk for falls, according to pilot studies. Researchers of the said pilot studies (2013), which were published on the  Journal of Environmental and Public Health, wanted to know how biking will affect the balance and leg strength of older adults.

What’s the result? Based on the second study, they learned that biking for at least an hour every week was enough to significantly improve the participants’ balance and ability to perform a timed one-legged stance.

Casual and athlete cyclists need to have good balance skills in order to keep their feet off the ground and stay upright on the bike. Riding a bike helps with balance by stabilizing and strengthening the muscles of your lower body, including your hips muscles and buttocks muscles (gluteus maximus).

Suggestion: In addition to regularly riding a bike, make it a point to perform other workouts for developing your core muscles. Your core muscles play an important role in maintaining balance when you’re biking or standing, so it’s vital to keep them strong and stable. 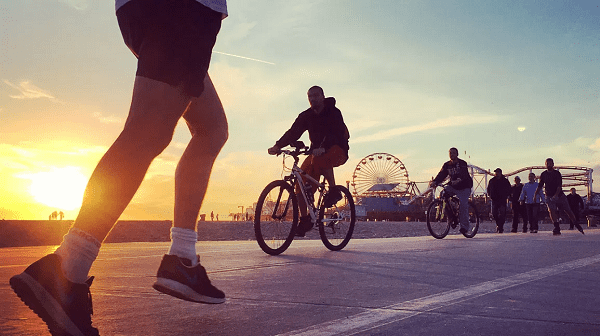 Endurance and stamina are important for any type of exercise and sport, including biking. The higher the intensity and the longer you can keep going without hurting yourself, the more you increase your endurance and stamina over time. Therefore, you’ll not only improve your performance, but you’ll also burn fat and strengthen your muscles.

But is biking better than running in terms of building endurance?

Both biking and running are known for their ability to burn a lot of calories and body fat. They can also build endurance and stamina, which you can continually improve as you grow comfortable with either biking or running. In fact, some people add either of these two to their cross-training routine to build more endurance.

While running is great for building endurance, it can put a lot of strain on the knees and muscles. That’s why biking is a more ideal option because it’s gentle on the joints, so you can do it for longer hours each day.

Sleep Foundation estimates that around 35.2 percent of adults in the United States get less than 7 hours of sleep every night. And according to the National Center for Biotechnology Information, 30 percent of American adults suffer from insomnia.

Now, there are different reasons for sleep deprivation and sleep disorders. One of these reasons could be not staying fit, at least that’s what the researchers of the University of Georgia discovered.

It’s still unclear how physical activities promote better sleep, but researchers believe that it has to do with their positive effects on the brain and body. For instance, aerobic workouts, such as biking, can greatly help manage stress and anxiety by releasing endorphins—“feel-good” brain chemicals that can relax your mind and promote a feeling of well-being.

Biking is a low-impact, fun, and effective form of exercise that virtually anyone can do. It doesn’t only help cut down your risk for certain diseases, but it also has a positive effect on your mental health. But before you get into this physical activity, be sure to talk to your doctor, especially if you have conditions that affect your balance, hearing, or vision.